Meet the Veterinarians & Team of Buckeye Veterinary Clinic in Akron! We’re pleased to provide exceptional vet services for your pets! 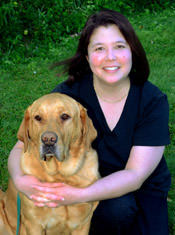 Dr. Charlotte Pavlik is seeing patients however this is on a limited basis. Our CS team can let you know her availability when you call the clinic. 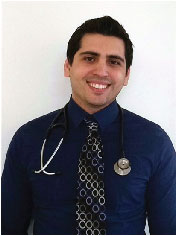 Dr. Vega is in the clinic Tuesday – Friday and select Saturday’s. 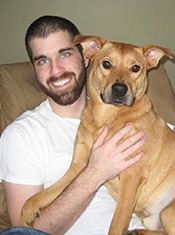 Sean Faulkner is a 2012 graduate from The Ohio State University: College of Veterinary Medicine.  He joined our staff in August 2019, previously he practiced in Michigan and the Medina/Akron area. Dr. Faulkner enjoys working in the veterinary field because he can be a voice for the animals that cannot specifically tell us what is wrong.  He and his wife, Olivia, were married on a Mayan Ruin in Belize in 2014. Together, they have 2 dogs (Lars and Rosco), 3 cats (Smalls, Glen and Bunny) 3 snakes (Maximus, Lola and Adriana) and a tarantula.  In his spare time, Dr. Faulkner enjoys skydiving, target shooting, travelling and soccer.

“Annual wellness bloodwork, even if not ill, is a great screening tool that may identify disease or illness early.” – Dr. Faulkner

Dr. Faulkner is in the clinic Monday-Friday and select Saturdays. 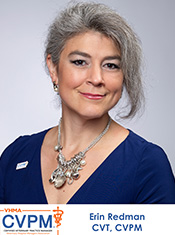 Erin has been with Buckeye since Dr. Pavlik expressed her desire to start a practice of her own back in the early part of 2010. Erin & her husband have a mini farm in the Portage/ Geauga county area. Her house pets are 3 cats – Bruce (and his sister Bianca) born in 2007 and still had 1 eye still closed when he was “dropped off” at the facility Erin was working at. Bruce is a true Tabby with quite the cat-titude! Kiki was a “special holiday gift” in 2008 from Dr. Pavlik and the vet clinic crew – she was not able to use her rear legs due to some spinal trauma. Do not be fooled she can walk, run, jump & certainly rules the house, despite her injury. Taz is the youngest and was brought to Buckeye in 2012 as a little stray 4-6 week old kitten from a neighborhood feral. He lived the first few years with a client and had a cat brother from another litter but due to owner job relocation he ended up with Erin & her husband. Taz is the most amazing Chocolate Point Ragdoll and has the typical “Clown” Ragdoll personality. Erin & her husband enjoy time working out, farm chores – caring for their egg laying hens – yes one is a fancy breed that is very docile & loves to be held – her name is Buffy and she is a Red Laced Polish; the others are Rhode Island Reds and Leghorns. Classic cars, travel round out the interests for relaxation the solitude of quiet country life.

Erin has an extensive history in many avenues of Veterinary Medicine including, Large Animal, Exotics, Oncology Research, Behavior, Dentistry, Cardiology and Business Operations. Her current position with the growing Buckeye Veterinary Clinic is Business Operations and Team Development. She still has a few hours with the veterinary medical team to keep her skills sharp, training and mentoring new hires and aid in surgical and emergent cases. 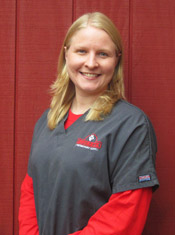 When Christin isn’t at Buckeye Veterinary Clinic, she is spending time with her family or using her nursing degree at a local hospital. Christin also enjoys horseback riding with her horse Micah. She also has a pair of cats Martini and Cosmopolitan, who oversee the whole family and helped train the families golden retriever, Gabby.
Christin is extremely talented and a motivating member of our clinic, and we can’t wait for you to meet her! 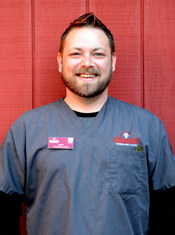 Terry is a Credentialed Technician (CVT) and is a 2011 graduate of Stautzenberger College. He did his externship here at Buckeye Veterinary Clinic in 2011 and we were so impressed with him we wanted him to stay on as an employee. He is licensed with the Ohio Medical Licensing Board and has passed the National Veterinary Technician Examination.

Terry was born and raised in Canton where he currently lives with his spouse Jacob and a small heard of furry and feathered children. His kiddos include three dogs; Ralphie, Penny & Tillie, Several fine felines, Plus a few feathered hens.

Terry enjoys being an integral part of the Buckeye Veterinary Clinic Technical Staff Team and is your contact for any Rx Food needs for your pets. 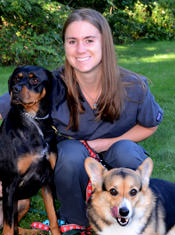 Has been in the Veterinary field since 2005 and obtained her Degree from Stautzenberger College in 2009. Her house has both dogs & cats along with a bearded dragon and fish. Archibald is her Pembroke Corgi and Loretta is her Coondog. Nacho is her spicy kitty cat!  Laura and her husband have two boys that keep them busy and they enjoy family time hiking, cycling, or any outdoor activities. Laura also loves dancing and is trained in many different styles! 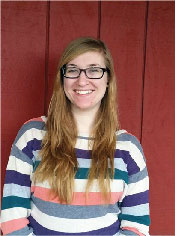 Lexi was born and raised down the road in the Manchester area where she graduated from Manchester High School. She is graduated from the Veterinary Technology program at Ross (formerly Brown Mackie College) in Canton June 2017. She has been around animals her whole life, and had spent almost seven years working with animals at a local pet store before starting her career as a Customer Service member at Buckeye Veterinary Clinic in April of 2015. 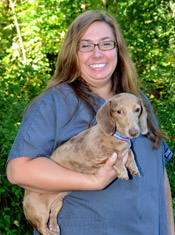 Chelsy currently lives in Coventry township with her husband Derrick, son Logan and her three dogs, Schatzi & Nessie (both mini dachshunds) and Blitzen (a great dane). She has been around animals her whole life, and for as long as she can remember has always wanted to work with animals. Chelsy has been with Buckeye since they opened in October of 2010 and is the Lead of the Customer Service Team. 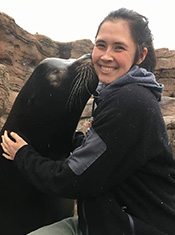 Katherine came to Buckeye in July of 2018 as a member of our CS team, her previous career before joining our team was being a Zookeeper. Her education is a degree in Biology with a minor in Psychology. Her house is busy with her family & pets. The two dogs are Koda & Panda and Varuna is her African Side Neck Turtle. Katherine and her family enjoy hiking and traveling. 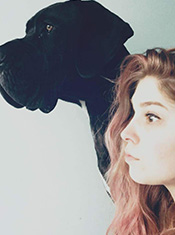 Has been with Buckeye since October of 2017. She is a graduate of KSU Fashion but her love for animals has brought her to a career in the veterinary clinic. Her companion Bingo, is a Great Dane, born in 2016. In her spare time, her and Bingo enjoy hikes or hanging out on the couch binge watching Netflix! 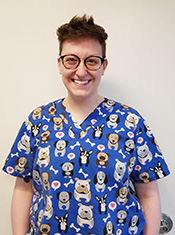 Joined the team at Buckeye in June of 2018 she is currently back to school to become a Credentialed Veterinary Technician. Kait shares her home with her feline soul mate – Noel, a Sphynx. Kait also enjoys yoga and ballet in her spare time.